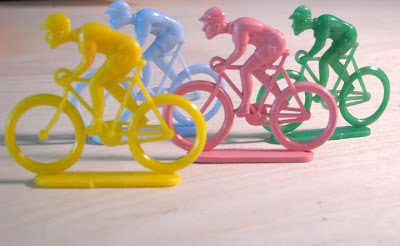 Allez!
About a month ago, I was cruising around Etsy and fell in love with these plastic cyclist figurines. I showed Richard and he nearly fainted with joy. I knew I had to have them and buying them for Richard was justification enough. They were not cheap. So I ordered and waited,  and waited,  and waited...

Richard kept checking the mail for them and after 3 weeks ...they have arrived! They look from board game and appear new rather than old. The detail is amazing. Especially how they are hunched over in a riding position. I started to play with them right out of the package. So fun moving them about. They measure 2 X 1 1/2 inches. Richard says they ride  singlespeed bikes with  balloon tyres. The period from the twenties or thirties. One thing ...they are cool.

Richard is planning to build a diorama for them. It should be a lot of fun. The light blue racer is my favorite reminding me of the old racing bikes. I guess I'll have to give these to him, but for now the cool little racers are on my side of the table!
Posted by galstudio at 4:50 PM