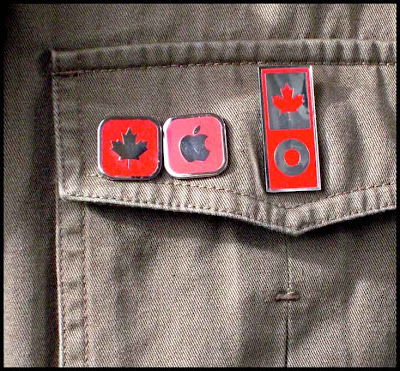 Well, there's one GOOD thing about the Olympics, is the offer from Apple. A few days ago, I kept Richard company by going over to the Apple store. His Macbook needed repair, his airport was kaput. We walked inside and I discovered a pleasant surprise. One of the blue t-shirted personal shoppers handed me a cool pin for free. It was an iPod special edition Olympic pin. We both took one. I admit I'm a Mac nerd so I noticed right away he was wearing another one with the apple design. So I inquired and he said that each store has a different one. I told myself to avoid the downtown area during the Olympics but this was an emergency. I had to get this pin. Last Sunday we parked and walked through the maze of Olympic tourists and Russian coaches to the downtown Apple store. Inside, I wasn't disappointed, as a personal shopper handed me the Apple pin. I'm complete and happy. Mac happy!
Posted by galstudio at 8:48 AM