First we take Tokyo then we take the world! 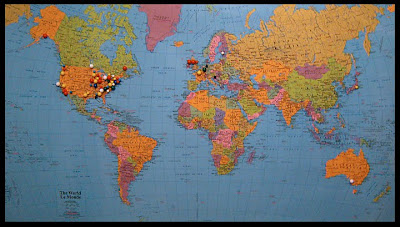 When Galstudio became so big that it needed it’s own corner in the house, I had no choice but to take over the dining room.

Right away I installed a large world map to visualize all the places I would sell to. To think that I could make something that could be enjoyed across the world is overwhelming. My first sale was the “Paris-Roubaix Cycling Cap” going in North Carolina. I can just remember the excitement, what a rush! I put the first pin on my map. With each new sale I added a new pin. Soon the east coast and the west coast of America was covered. I knew that I would sell in Europe and the UK eventually but the real surprise came last week when I sold in Tokyo. I’m as excited today as when I place my first pin last March. I am so grateful to have found Etsy, a place where I can express my creativity and be recognize & rewarded for it.

I see a bright future for Galstudio. Now that I have taken Tokyo I can take the world!

Posted by galstudio at 9:59 AM